On Sunday, May 2, the Gonzaga community came together for the 73rd Annual Father-Son Mass on Eye Street, marking the first school-wide, in-person event in over a year. "It was such a joy to be together," said Grant Palmer, President of the Gonzaga Fathers Club, which hosted the event. "It took an incredible amount of planning and creativity on Gonzaga's part to pull this off, and we are profoundly grateful for all the work that went into making the day so memorable. I'd also like to say a special thank you to the many dads who helped plan this event, in particular our event chairs Tom Scherer, Patrick Cooney, and Mark Shaheen "

The Mass took place in St. Aloysius Church, where Gonzaga President Father Planning was joined by concelebrants Father Gap LoBiondo, SJ and Father Harry Geib, SJ. Seniors and their dads were invited to the Mass in St. Al's, while juniors and sophomores watched a livestream in the Carmody Center and freshmen watched a livestream in the Sheehy Theater. Incoming freshmen of the Gonzaga Class of 2025 were invited to watch the Mass from home. After the Mass, Rear Admiral Edward K. Kristensen, USN(Ret) gave a keynote address. Press the play button below to watch a highlight video from the day:

In addition, David Dugan '98, Gonzaga's Vice President of Alumni and Advancement, announced the this year's Alumni Man of the Year and Father Novotny Service Award winners: Dr. Mike Kelly '70 and Mr. Reginald Wills '85, respectively. Typically honorees are presented with their awards during a breakfast that follows the Mass, however this year we invited these two distinguished alumni to offer their remarks during a video call with Mr. Dugan and Father Planning. You can learn more about them and listen to their remarks here.

In the lead-up to the event, Gonzaga dad Patrick Cooney collected photos of fathers and sons for the annual father-son photo slideshow. Click the play button below to watch this year's video:

Finally, below is an album of photos from the day--a day that was filled with renewed hope and the joy of once again being together as a community on Eye Street. 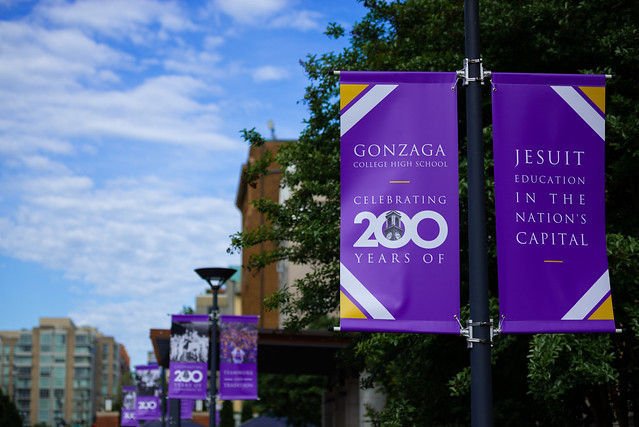