The Gonzaga Mothers Club held its 36th Annual Mother Son Mass and Celebration on Sunday, March 7. The all-virtual event was split into two parts--a Mass livestreamed from Our Lady's Chapel followed by an interactive live Zoom for current students and their moms.

During the live portion of the event, mothers and sons had the chance to hear remarks from GMC president Jeanette Staton, Gonzaga President Father Stephen Planning, and SGA President Mak Krivka '21; Conrad Singh '00, Gonzaga's Manager of Digital Media and Multimedia Production, served as the emcee for the event.
After those initial remarks, students and their moms were divided into breakout rooms, where seniors were invited to share some of their favorite memories at Gonzaga. In keeping with the longstanding Mother-Son tradition of seniors giving their moms a rose during the event, the GMC had delivered swag bags to all of the seniors' homes that included a chocolate rose, which the boys then gave to their mothers during the call. After the breakout rooms were finished, everyone rejoined the main Zoom call to watch a slideshow of mother-son photos.
In this news story, you will find a video recap of the day, the full slideshow of mother-son photos, and a Flickr album of photos. Thank you to the GMC--and in particular Jeanette Staton and Mother Son chairs Meghan O'Boyle, Jackie Krieger, and Alice Hrdy--for making the day such a success! 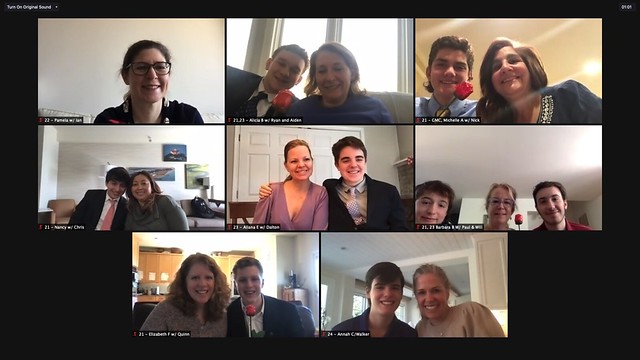