Gonzaga Lacrosse continued its longstanding tradition of honoring and giving back to the United States military last week when the team took part in a ceremony at Arlington National Cemetery and packed and shipped care packages for deployed servicemen.
The day began with the team having the privilege of being able to participate in a wreath laying ceremony at the Tomb of the Unknown Soldier. Afterwards, the team headed back to Eye Street to box care packages for soldiers—a tradition that the Lacrosse program began 12 years ago.
Altogether, the team packaged over 250 boxes for Marines and sailors in the 1st Reconnaissance Battalion, a Marine unit that is currently at sea as part of the 11th Marine Expeditionary Unit (MEU). The boxes were filled with everything from toiletries and other basic necessities to magazines, notebooks, and pens. Players also wrote letters to the deployed servicemen and women who would be receiving the boxes.
“One of the coolest parts of the partnership we’ve developed is the letters that some students receive back,” said Varsity Head Coach Casey O’Neill. “The kids are able to develop relationships with these soldiers that extend beyond our service project, and that’s pretty awesome. We’ve even had several service members come back and speak at our end-of-year banquets a few times. It’s great to have grown this program of giving back and made it such an integral part of our team experience.”
The day ended with the annual Senior Dinner in the Lower Commons. Below are some great photos from a memorable day. 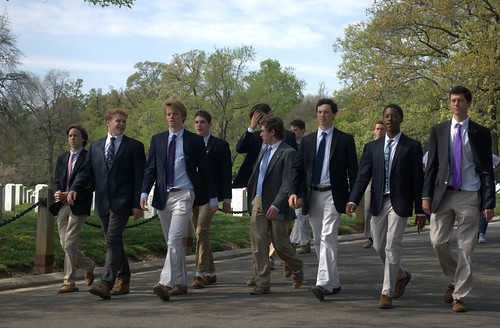