Congratulations to the WCAC Basketball Champs!

In front of a capacity crowd at American University's Bender Arena, Gonzaga defeated St. John's 60-56 on Monday, February 25 to win their third WCAC Championship crown in the last five seasons. The victory was the culmination of a long winning streak in which the Eagles won 18 of their previous 19 games to earn a spot in the championship game.

Terrance Williams '20 (20 points) and Anwar Gill '19 (19 points) led the way for the higher seeded Eagles. Remarkably, this game was the first time the two teams--the oldest Catholic high school rivalry in the nation--had ever faced off in the WCAC championship basketball game. In order to get there, St. John's upset DeMatha in the semifinal while Gonzaga avenged two regular season losses to Paul VI. Junior Chuck Harris led the way in the semifinal win with 16 points, with a number of key plays coming down the stretch.

Gonzaga jumped out to an early lead in the much-anticipated championship game as they focused on defending a talented Cadet squad. St. John's closed the gap to just one point in the final minute, but Williams would shut the door by making four consecutive free throws to put the game on ice and begin the celebration on Eye Street. Williams told The ?Washington Post: “I told those guys in the locker room that, even though we lost last year, I wasn’t going to let that happen again this year as [their] leader. We all came out here and played strong and played together.”  Click here to read a full recap of the game from the Post. 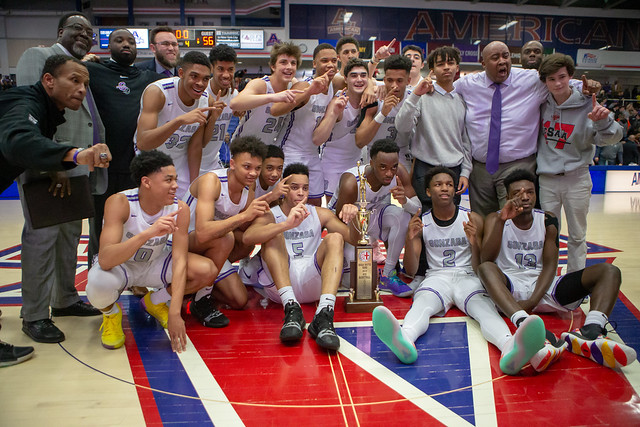 And click here to see complete game highlights and interviews by ?CapitolHoops.com.

In addition to the championship win, congratulations to the following Eagles for earning All-WCAC honors:

Congratulations to Coach Turner and to the Eagles on an amazing season so far!  The team will finish out the 2018-19 season at the annual Alhambra Catholic Invitational Tournament from March 7-9.