The clock read :04 with the Eagles 53 yards away from the endzone and trailing by three points to DeMatha on a cold Sunday night at Catholic University.  Sophomore quarterback Caleb Williams bounced up and back and then back up into the pocket before launching the Hail Mary pass 68 yards into the air, dropping it perfectly into the hands of senior wide receiver John Marshall amidst four Stag defenders and senior teammate Justin Ball, giving the Eagles their first title since 2002.  Williams accounted for 480 of the Eagles 530 yards on offense. He was 13-29 for 359 yards through the air, carried the ball 20 times for 122 yards on the ground, and caught one pass for nine yards. He had a hand in all seven Gonzaga touchdowns on the night as he threw for three, ran for three, and caught one.

The Eagles were down 20-0 at the end of the first quarter, but rallied back to within six behind a one yard QB sneak for a touchdown and 37 yard touchdown pass to Aaron Turner '21.  The Stags would respond to close the half with another score, but the PAT was no good making their lead 26-14. Gonzaga had one more shot at points before the half, but Williams' pass was intercepted on the goalline.

After going three and out to open the second half, the Eagles got a stop on defense to get the ball back on their own 13 yard line. Seventeen plays later, Gonzaga found the endzone on the reverse pass from Marshall to Williams. DeMatha responded once again, scoring on a 16 yard pass on their next drive to make their lead 33-21 going into the fourth quarter.

The Eagles went three and out to start the fourth quarter, giving the ball back to the Stags. This time, the defense held DeMatha to a field goal, setting the stage for the furious comeback from Gonzaga. A mix of running and passing from Williams led to his 25 yard touchdown run with 5:46 left in the game. The two-point conversion attempt failed making the score 36-27, Stags. Desperately needing a turnover, senior defensive end Joseph Weté forced a fumble and it was recovered by senior linebacker Aaron Davis on the DeMatha 31 yard line. Four plays later, Williams was in the endzone again, running it in from 20 yards out. The PAT was no good, making the score 36-33, Stags with 3:03 remaining. The defense got a great stop to force DeMatha to punt with 1:57 left. Facing a third down and 33 yards to go, Williams connected with senior wide receiver Sam Sweeney on a 50 yard completion to put the Eagles in position to take the lead with under a minute to go. Senior wide receiver Dean Engram appeared to catch the go-ahead score on the next play, but was ruled out of bounds. Gonzaga did not flinch, as Williams found Sweeney again for the 11 yard touchdown to cap off the eight-play, 69-yard drive. The PAT was good and the Eagles led for the first time on the night, 40-36 with :29 remaining.

After being backed up for a questionable celebration penalty, the Eagles elected to squib kick on the ensuing kickoff. DeMatha returned the kick 73 yards for a seemingly back breaking touchdown to give the Stags the 43-40 lead with :15 left on the clock. Gonzaga again remainded focused on the moment, and got a 27-yard return on the kickoff from Engram to give them a shot at getting into Hail Mary range with :10 left. On the next play, Engram caught a 13-yard pass and got out of bounds to stop the clock with :04 left to give the Eagles one last prayer.  The improbable championship-clinching 53 yard touchdown pass from Williams to Marshall ensued and sent the purple faithful into a frenzy!

The win, being called The Best High School Football Game Ever Played by many, gave Head Coach Randy Trivers his first WCAC Championship in his fifth year leading the program.

The championship game's dramatic finish got national and global recognition, from ESPN to Good Morning America -- click here to read a letter from Father Planning that links to all of the coverage from around the country.  Also, click to see Coach T's emotional reactions after the game, as he raises the trophy and embraces his father  who has been battling cancer over the last five years.

Click here or below to see some great photos from the game: 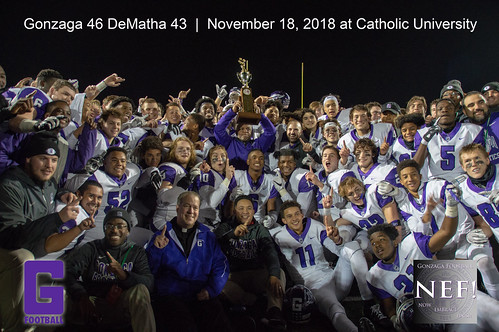 Some photos in the gallery above are courtesy of Doug Kapustin of the Washington Post.  To view a full gallery of his photos from the WCAC Championship game, click here. All photos are available to purchase directly from the photographer. To see more of his work, visit www.dkapustin.com.

Hail Gonzaga!
Back
Celebrating 200 Years of Jesuit Education in the Nation's Capital